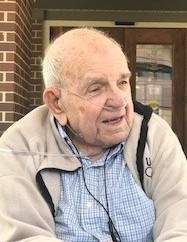 Bernard N. Miller (Bernie), 96, of Lindenhurst, IL, passed away Tuesday, April 27, 2021 at Condell Medical Center in Libertyville.  He was born October 30, 1924 in Rhinelander, WI to Lyman H. and Margaret A. (Rathermel) Miller.

Bernie grew up in Adams County, WI. He fought in WWII in the 84th Infantry Division, European Theater, earning a Bronze Star. When Bernie was discharged in 1946, he attended the University of Wisconsin, earning a degree in Engineering.  In 1948, he married Margaret D. Anderson in Arkdale, WI.  The couple moved to Lake County, IL.  They built a home in Gurnee, IL where they lived for 64 years.

Bernie was very active in the community serving on the Spaulding School board, the Gurnee Planning and Zoning board, volunteering at Gurnee Community Church and the Warren Township Historical Society and serving as election judge.  He was a member of the Gurnee American Legion Post 771, serving as Commander, Vice Commander and Adjutant and a member of the Legion’s Home Board.

Bernie had a varied career focused on the construction trade.  Before he retired, he worked for Roper IBG/Baumeister Construction in Wheeling, IL.  The company sold and constructed glass structures such as skylights, geodesic domes and greenhouses.  He was a field superintendent, at first traveling in the Midwest and then across the U.S.  At the end of his career, he was managing job sites internationally in places like Singapore, Cypress, Germany, Saudi Arabia and Panama.

In his retirement, Bernie set up a serious woodshop in his garage making all sorts of wood projects and beautiful pieces of furniture.  He also used his knowledge of construction to build another house for his daughter, garages, sheds and many diverse remodeling projects for family, friends and neighbors.  He put in a huge garden every summer, sharing the produce as it was harvested.  Bernie was an avid White Sox fan.

Services for Bernard Miller will be live streamed starting Tuesday, May 4, 2021 at 11:00 AM at https://gcchome.online.church/

To order memorial trees or send flowers to the family in memory of Bernard Miller, please visit our flower store.