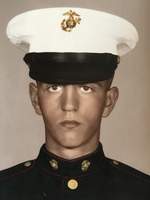 David served in Vietnam from 1965 to 1969 as a member of the U.S. Marine Corps. He was a member of V.F.W. Post 4308 in Lake Villa, IL. He enjoyed building legos, country music and watching Sci-Fi on television.

David married the former Grace Rocque on January 10, 1974. He worked for 20 years for the Solo Cup Corporation.

David was preceded in death by his parents and his brother, Donald Tiffany Jr.

Entombment will be at Warren Cemetery on Monday April 9, 2018 with Marine Corps Military Honors.

To order memorial trees or send flowers to the family in memory of David Tiffany Sr, please visit our flower store.