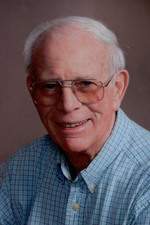 Edgar Huesing (aged 81) of Wadsworth, IL passed away at his home on 21 August 2017 surrounded by his family. Edgar was preceded in death by parents Edgar and Ella "Dolly" (Ostrander) Huesing, and his wife Patricia, R.N. (formerly Olk).

Edgar served in the U.S. Army Reserves, retiring at the rank of Master Sergeant. In civilian life, he worked as a Civil Engineer with McClure Engineering. He was a lifelong member of Christ Episcopal Church in Waukegan IL and a proud member of the American Legion.

Funeral Services will be at Christ Episcopal Church, 410 Grand Avenue, Waukegan, IL on Saturday, September 9, 2017, starting with visitation at 9:00 AM with services beginning at 10:00 AM. Services will be presided over by Rev. Eileen Shanley-Roberts. Burial will be at Warren Cemetery, 1495 North Cemetery Road, Gurnee IL. Military Honors are to be presented graveside to Edgar with flag presentation to Major Scott Huesing USMC (Ret). Upon conclusion of graveside services, there will be a reception at Christ Episcopal Church. Funeral services and burial will occur at Warren Funeral Home, Cemetery, and Mausoleum.

Instead of flowers, please make donations online to:
Save the Brave, A certified non-profit committed to helping veterans with post traumatic stress through outreach programs.

To order memorial trees or send flowers to the family in memory of Edgar Huesing, please visit our flower store.