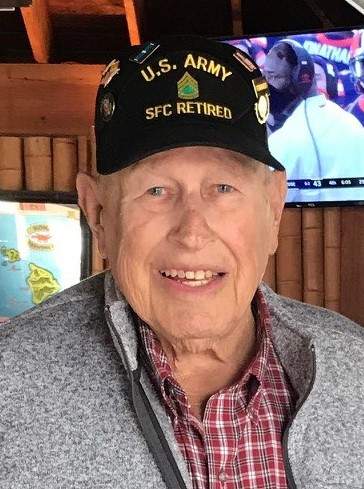 Harry Lee Owsley, 87 of Libertyville passed away on Thursday, October 15, 2020 at his home.

He was born on October 1, 1933 to the late Everett and Irma (Hodges) Owsley in Bandana, KY.  Harry was drafted into the United States Army in 1954 and retired in 1974 after serving three tours in the Far East and two tours in Europe.  He married his first wife, Hildegard Deppert in 1958.  On August 8, 1980 he married Elizabeth “Betty” Angelovich Beckley.  After retiring from the Army, Harry worked for Consolidated Fire Control and Atlas for many years.  He retired for a second time and then worked at Bass Pro for nine more years before retiring for good.  Harry was a basketball referee and baseball umpire for 43 years for Lake County Schools.

He was preceded in death by parents, his brothers, James E. Owsley and Robert Owsley and his sister Martha Siegmund.

Military honors will be rendered by the United States Army at the mausoleum immediately following the funeral service.

In lieu of flowers, donations may be made in Harry’s name to Lake County Honor Flight or the Veteran’s charity of your choice.

In accordance with current State of Illinois mandates due to the Covid-19 pandemic, all guests will be required to wear a face mask at all times.  There will be a maximum of 50 people allowed in the funeral home at a time and proper social distancing must be practiced.  We thank you for your cooperation.

To order memorial trees or send flowers to the family in memory of Harry Owsley, please visit our flower store.