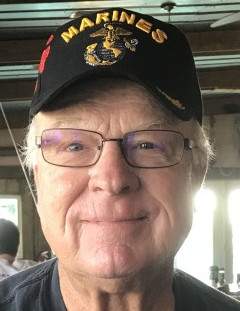 Jerry Max Liggett of Gurnee, IL passed away on October 4, 2022 at home surrounded by family. He was born in Bloomington, IL on May 28, 1947 to Max and JoAnn Liggett. He was the 1st of six children.

Jerry went to Riverside Brookfield High School graduating in 1965 having played offensive tackle for the varsity football team.  He then enlisted in the United States Marine Corps. Jerry went to Sniper School at Camp Lejeune, NC where he earned a Rifle Sharpshooters badge and a Pistol Marksman badge. He went on to Sea School in Portsmouth, VA and then finally to the Marine Corps Institute (correspondence). He served 2 tours with the 3rd Marine Division in Vietnam and was honorably discharged in 1969 earning multiple medals.

He went to Western Illinois University where he met the love of this life on a hayride.

On June 17, 1972 Jerry married Diane Rosendahl and they were happily married for 50 years. They spent their honeymoon (or lack thereof)  in Champaign/Urbana at the University of Illinois Police Training Academy. Jerry joined the Des Plaines Police Department in 1972 and proudly served for 25 years.

He was preceded in death by his parents, Max and JoAnn Liggett, 2 siblings, Jack Liggett and Jennifer Winters.

Throughout his life he enjoyed building model railroads, gardening, playing golf, watching sports and his true passion was vacationing. He enjoyed traveling the world, creating memories with friends and family in such places as Iceland, Ecuador, Italy and Panama. His favorite place to be was on a cruise ship with his beloved family.

The Celebration of Jerry's Life will be held on Saturday, November 5, 2022, at Warren Funeral Home 1475 N. Cemetery Rd.in Gurnee, Illinois 60031 (Located on the northside of the intersection of Tri-State Parkway and Cemetery Road). The memorial visitation and memory sharing will be from 10:00 a.m. until Noon when the memorial service will begin.  Inurnment will immediately follow at Warren Cemetery and Mausoleum 1495 N. Cemetery Rd., Gurnee, Illinois 60031.

In lieu of flowers memorial contributions may be directed to Suncrest Home Health and Hospice 5 Revere Drive, Northbrook, Illinois 1-847-983-0017 (suncrestcare.com)

The Liggett Family has entrusted Warren Funeral Home to assist with the arrangements. Please call 1-847-855-2760 for further information.

To order memorial trees or send flowers to the family in memory of Jerry Liggett, please visit our flower store.