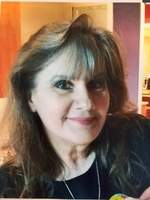 Josephine Mary Stewart (nee Sulentic) 64 of Johnsburg, IL passed away at home Friday June 9, 2017 with her family by her side. Josephine was born December 10, 1952 in Waukegan and had been a lifelong resident of Waukegan and Gurnee until moving to McHenry two years ago. She was a former member of Queen of Peace Church in North Chicago and did volunteer work for the USO and the American Cancer Society, she loved to garden and also bake. She married her husband Dave in 1990 in McHenry. Survivors include her husband Dave, three sons; Eric (Tanya) Morris of Lake Villa, IL, Adam Morris of Ingleside, IL, and Matt (Jennifer) Klosinski of Fox Lake, IL; five daughters Tonya (Doug) Monsen, Tina Herr and Katie (Steve) Nannini of Buffalo Grove, IL, Tara (Bill) Walker of McHenry, IL, and Ashley (Eric) Smith of Lakemoor, IL; one brother Jerry (Ilene) Sulentic of McHenry, IL, two sisters Angel (Joey) Barrera of Gurnee and Bernadette (Mike) Baumstark of Libertyville; ten grandchildren, and five great grandchildren. She was preceded in death by her parents Peter and Jean Sulentic and one brother Frank. Friends may visit with the family on Tuesday, June 13, 2017 at Warren Funeral Home, 1475 North Cemetery Rd., Gurnee from 4-8pm and on Wednesday at St. Patrick Catholic Church, 15000 Wadsworth Rd, Wadsworth, IL, visitation starting at 10:00am followed by services at 11:00AM in the Main Church, presided over by Fr. James Merold. Entombment will follow at Ascension Cemetery in Libertyville. Donations may be made in Jo's memory to either the American Cancer Society or the Wounded Warrior Project.

To order memorial trees or send flowers to the family in memory of Josephine Stewart, please visit our flower store.