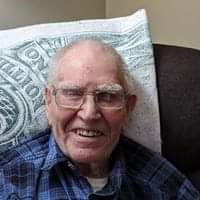 Norman Franklin Haley, 94 of Fox Lake, IL, passed away peacefully at The Cottages of Fox Lake on Sunday, June 21, 2020.

He was born on June 28, 1925 to the late Albert and Mary Lee (Ferrell) Haley in McMinnville, Tennessee.  On June 4, 1947 he married Elma G. Rinehart.   Norman served in the U.S. Navy on board the S.S. Foreman in the Pacific during WWII.  He received a Purple Heart after a Kamikaze plane hit his ship.  Norman worked at U.S. Steel in Gary Indiana after completing his master’s degree at Indiana University.  He retired from Lake Cook Farm Supply were he worked as a cost accountant.


He was preceded in death by his wife of 71 years, Elma, and his son James Roy Haley.


There will be a private burial service at Warren Cemetery.

If so moved, Donations in his memory can be made to:

To order memorial trees or send flowers to the family in memory of Norman Haley, please visit our flower store.