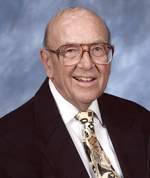 Preston (Pres) F. Helgren, of Gurnee, died at age 91, just as his father had 40 years earlier, on March 14, 2018. He passed away at home, surrounded by his family. Born on June 30, 1926 in Waukegan, he lived most of his life there or in Gurnee.
He graduated from the University of Wisconsin, Madison with a degree in Chemistry. After working at Carnation in Milwaukee, Pres spent the rest of his career as a research chemist at Abbott Laboratories. Like his father, he retired after 36 years of service. While at Abbott, he was a specialist in gas chromatography and amino acid analysis. His greatest achievement while at Abbott in the eyes of his children was that he met and then married Helen Efinger, a fellow chemist. They celebrated 58 years of marriage. She preceded him in death in 2011.
Pres was a man of many dimensions and interests that evolved over the course of his life. A life-long member of Christ Church in Waukegan, he sang in the choir, served on Vestry and was a member of the Christ Care group. Because of his work as a volunteer for Elder Care at Christ Church, he was named Senior Citizen of the Year by the Lake County Council for Seniors. He inherited a love of gardening from his parents and when living in Waukegan, had a perfect yard and an astonishingly beautiful rose garden. After moving to Gurnee with more land to tend, he planted hundreds of trees on the property. The vegetable garden and orchard he nurtured were highly productive. He and Helen became passionate about prairies and recreated prairie landscapes around the Gurnee area as well as on their own land. Pres lovingly planted and tended a little prairie garden in front of his church in a spot where "nothing would grow". He enjoyed greeting all that walked past while he cared for his plot.
In 1933, Pres went with his family to the Century of Progress World's Fair in Chicago. There, he saw the Chevrolet exhibit, where a car was assembled in a half hour. His love affair with the automobile began. He collected antique cars over the years; he and Helen were active in the Waukegan Chapter of the Antique Automobile Club of America. He served as president of the chapter and was on the Illinois Region board. Pres and Helen enjoyed traveling the country going to car meets and eventually winning the top prize, a grand national award with his treasured 1933 Chevrolet, inspired by that childhood memory.
Always a lover of music, Pres possessed a fine tenor voice and played the clarinet in high school and then in the University of Wisconsin Band, under the direction of the legendary Ray Dvorak. He was a patron of the area classical music groups and listened only to WFMT. Pres was a die-hard Wisconsin Badger fan; he and Helen traveled to many of the Bowl games to cheer the team, and he always had the current team roster printed out to reference when watching games at home. Pres loved nature, cared deeply for God's creation and used his time and resources to champion environmental causes. He was a dedicated volunteer for the Lake County Museum. Pres loved being outdoors and had a lot of fun on many camping, canoeing and fishing trips with family and friends.
He and Helen golfed every day for years. He continued to golf until arthritis increased his handicap too high for him to bear; he continued to work out regularly at the gym until a couple months ago, and was a voracious reader as his body declined. He was curious to the end.
Pres lived life passionately, and was known for his hearty laugh. He could be moved to tears by something touching or funny. A really great joke was referred to by his nieces and nephews as "Uncle Pres glasses off". He was infamous on the golf course for lamenting a bad shot by donating the offending club to the nearest water hazard. Yet, he quietly and generously supported the causes he held dear: the environment, the less fortunate, education and the arts.
Pres was preceded in death by his parents Fred and Esther, wife Helen, two infant daughters, sister Mary Ellen Johnson and niece Susan Johnson. He is survived by his son Daniel (Elizabeth) Helgren of Gurnee and daughter Mary Catherine (Richard Radek) Helgren of Green Oaks, step-grandchildren Zachary, Noah and Madeline Rose, nephews Preston Johnson and Peter Johnson and his best friend in the whole world, Eileen Graham.
Visitation from 4-8 pm on Friday April 20, 2018 at Warren Funeral Home, 1475 N. Cemetery Rd, Gurnee, IL. Memorial Service 11 am on Saturday April 21 at Christ Episcopal Church, 410 E. Grand Ave, with visitation from 10-10:45 prior to the service. Memorials may be made in Preston's name to Christ Episcopal Church, Waukegan or Openlands, 25 East Washington Street, Suite 1650
Chicago, Illinois 60602; https://openlands.org/support/
Warren Funeral Home is assisting the family.

To order memorial trees or send flowers to the family in memory of Preston Helgren, please visit our flower store.